When two friends — Ramadan Suleman and Bhekizizwe Peterson — came together in 1995 to form a film company, they named it Natives at Large, a phrase drawn from Sol Plaatje’s Native Life in South Africa. Plaatje uses this phrase to signal the marginal status of Black people in colonial-apartheid South Africa, but the two film makers reinterpreted it to articulate the defiant filmic practice they envisioned.  As Peterson recently explained in a published roundtable on their award-winning feature film, Zulu Love Letter:

We read it as an enticing and subversive call to embrace a political and creative orientation that is predicated on the dividends that can be gained by insisting on remaining at large in terms of ideology and aesthetics, whatever the historical, political or economic context we find ourselves in (2020).

The dividends of remaining at large have been plenty. Natives at Large has 32 film and TV projects to its name (see http://nativesatlarge.co.za/projects/). Across their work, the duo rejects mainstream aesthetic and ideological trends, prioritising African audiences, epistemologies and artistic practices. Peterson produced or wrote several feature and documentary films including Miners Shot Down (2014), The Battle for Johannesburg (2010), Zwelidumile (2010), Zulu Love Letter (2004), Born into Struggle (2004) and Fools (1997); in addition to mentoring the eight budding filmmakers behind Rights of Passage (2015), with Suleman and Neville Josie. But the academy is more familiar with Peterson’s scholarly work, including the foundational monograph on early Black theatre, Monarchs, Missionaries and African Intellectuals: African Theatre and the Unmaking of Colonial Marginality (2001); the volume Sol Plaatje’s Native Life in South Africa: Past and Present (2016) co-edited with Janet Remington and Brian Willan; and the forthcoming collection,  Foundational African Writers: Peter Abrahams, Noni Jabavu, Sibusiso Nyembezi, E’skia Mphahlele (2022), co-edited with Makhosazana Xaba and Khwezi Mkhize. Each of these projects is anchored in a native at large orientation of critical noncompliance with dominant conventions and value systems.

Bhekizizwe Peterson, an award-winning film writer, producer, theatre practitioner, literary and cultural critic, passed away on 16 June 2021. Born in Johannesburg, Peterson held a BA from the University of Cape Town, an MA from York University, and a PhD from the University of the Witwatersrand. He joined WITS faculty in 1988, rising to the rank of professor. Peterson leaves us with an outstanding portfolio of scholarly, artistic and activist work spanning African theatre, cinema, Black intellectual history, youth culture, and life writing.

Apart from his scholarship, films, and conference attendance, the ALA community knew Peterson for his active role on the JALA editorial advisory board. Peterson also convened the memorable 2014 ALA conference, at Wits University.  Beyond the ALA umbrella, Peterson cultivated a continent-wide Pan-African scholarly and artistic mentorship and collaborative network. In addition to his deep commitment to the Africa-based film-making community, Peterson regularly supported academic mentorship workshops convened under the auspices of the African Humanities Program, most recently in Ethiopia and Tanzania. Three of his forthcoming works — the afore-mentioned co-edited volume, a chapter co-authored with his mentee, and a roundtable response to a young colleague’s book — map Peterson’s intergenerational collaborations. He lived up to his name’s promise, and looked after many communities with empathy and care. These will remember his rigour, generosity and witty sense of humour.

Peterson’s oeuvre demonstrates his ethos of remaining at large, often swimming against the currents of the day. He made choices that spelled a deep intentionality about what mattered; and why. His intellectual and personal integrity was non-negotiable, even when these collided with the neoliberal university’s logics and the film industry’s preferences. It is no small achievement that he built a distinguished scholarly and artistic career, despite being a native at large in a world that treasures uncritical compliance. At a time when South African cinema was still soaked in post-1994 euphoria, Peterson and Suleman made Zulu Love Letter; a film that posed difficult questions about the unresolved traumas of apartheid; while rejecting dominant cinematic registers of the day. That Zulu Love Letter continues to enjoy scholarly attention, points to the long shelf-life of the questions it poses and the aesthetic choices it makes.

Long before critiques of the neoliberal university became commonplace, Peterson understood himself to be in the university, but not of the university. His passion for multiple genres and platforms of knowledge production saw him straddle the corridors of the academy, the community theatre scene, and the film world. His work firmly rejects the seductive currencies of trendy trajectories. Instead, it excavates neglected foundational thinkers and ephemeral genres. Far from fetishizing these bodies of work, Peterson’s writing on figures such as Sol Plaatje and HIE Dhlomo, like his evocations of Black cultural practices in films and his theorisation of Black Public Humanities, is a more ambitious project.  It is both excavatory and reparative. It responds to contemporary debates on decolonializing curricula and celebrations of theory from the south by inviting us to pause and consider the risks of erasure of prior African decolonial work and modes of theorisation.  It cautions against the false novelty of current challenges and responses. This supposed novelty obscures oppressive systems’ patterns of reinvention, while alienating us from the resources embedded in prior victories.

For those who knew about the monograph he was writing — provisionally titled The Art of Personhood — Peterson’s transition is doubly painful, in denying us his book length theorisation of Black Public Humanities; and insights into African communities’ articulations of Black-being, through art, culture and conceptual work produced outside the academy, in churches, trade unions, local newspapers, self-help organisations and community cultural centres, among other sites.

The philosopher Ifeanyi Menkiti writes that in African communities, personhood is an acquired competency, not biologically inherent. People can fail at personhood; they can be incompetent at it. In Kiswahili, this distinction is articulated in the phrases, huyo ni mtu – that is a person; and huyo si mtu — that is not a person.

We will not experience The Art of Personhood.  But we know this to be true: Bhekizizwe Peterson was a person. We experienced a person, in the full meaning of the concept. 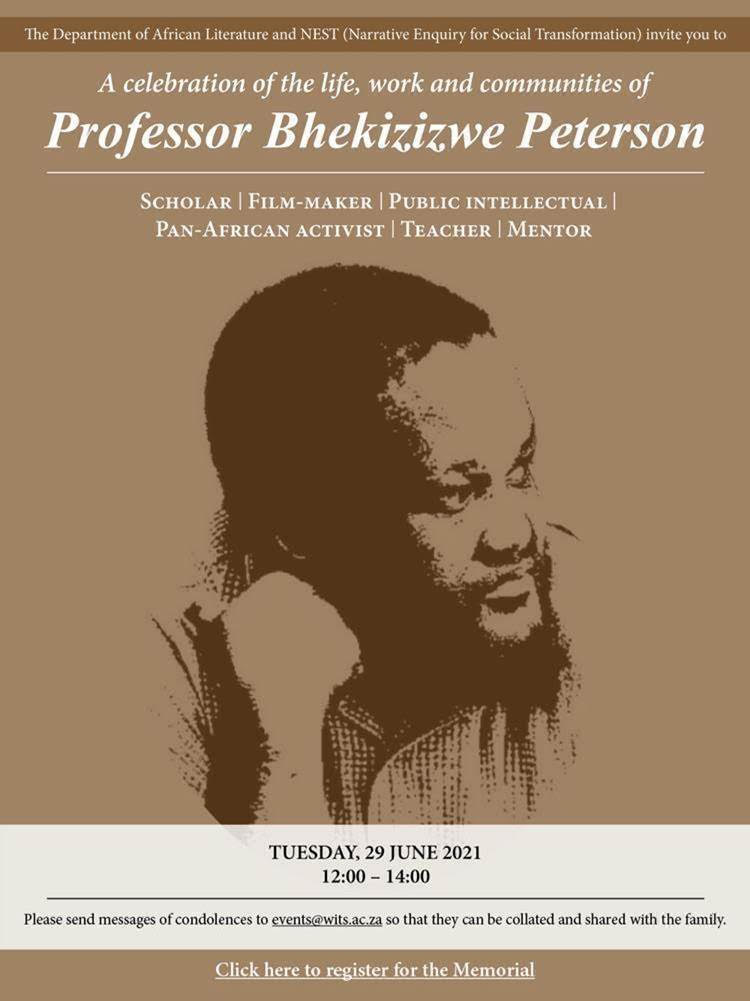 “I write to condole with those who knew Bheki and lament his passing. It looks like I have known him the longest, having met him at the Ngugi:Texts and Contexts conference at Penn State in 1994. We kept in touch sporadically since then, but at every ALA conference he attended thereafter--Charleston in 2013, Yale in 2017, Ohio State in 2019, not to mention the memorable Wits conference in 2014--we made up for lost time with long celebrations. In all these encounters, it is his wit, intellect, and humility that struck me the most. Coming so soon after the passing of our mutual friend ‘Bra Willie’ Kgotsisile makes Bheki's transition all the more sorrowful.”

“I wanted to add my voice to this expression of shock and sadness over Bheki's death. It was James Ogude who broke the news to us early Wednesday morning, saying Bheki had been ill with COVID-19 for about three weeks. He and his colleagues in the School of Literature and Media at Wits University moved mountains to ensure the success of 2014 ALA annual meeting, but it was his personal intervention that I remembered most. He was also supportive and attentive when James hosted our collaborative workshop at Wits two years before. And colleagues would remember his contribution to the second event in the Lecture Series last November, moderated by Morádéwún. I often hailed Bheki whenever we met by calling out "Natives at Large"!, the name of the production collective he operated with Ramadan Suleman and others. His death is a very disorienting loss, and sincere condolences to his family and colleagues.”

“I can't say I knew Bheki well -- I only met him in person on two occasions that I remember well. But I do know that in both I remember thinking -- this is someone I would like to get to know better. I am very sorry to hear this news.”

“The passing of Bheki is hard to believe. He was so deeply supportive of the ALA--hosting the annual conference at Wits was certainly a highlight of the ALA's history. Bheki's contributions as writer and producer to films like Miners Shot Down is inestimable. So utterly generous---always interested, no matter how seldom one met in person, how you were doing, what you were up to. Such a loss.”

“This is devastating news. Bheki was a powerhouse. I had the pleasure of meeting him at Wits during a 2011 Johannesburg visit, and I last saw him in November 2019 over a generous and collegial lunch. Wherever he was, he was greeted with the honorific "Prof" by faculty, staff, students, and non-academic admirers alike. Brilliant as he was, and astute as he was about politics, he maneuvered with humility and a splendid sharp wit at every turn. And what a major force in ALA!”

“I am so sad to hear this news. I first met Bheki in 2011 at the ALA conference at Ohio University. I was a Ph.D. student preparing to defend my dissertation. His films are one of the reasons I study South African cinema, so meeting him was was particularly meaningful for me. After the conference, we spent the long bus ride from Athens to the airport talking about my research. Since then, I've periodically seen him at conferences or been in touch through email. He was always so generous with his time and supportive of a young scholar. This is an immense loss for African cinema.”

“I first met Bheki during preparation of the 2014 ALA conference in Johannesburg. As Treasurer then of the ALA, I was bound to interact with Bheki when we started preparation of the conference in 2013, during the conference at Wits, and after the conference. Bheki’s sensitivity, generosity, intelligence, and humility shined each time. We ended up having a memorable conference thanks to Bheki’s indefatigable work and deep love for the ALA. Between 2014 and this year, I had other occasions to meet the man. More recently, as Vice-president of the ALA, I called upon Bheki to help with our annual awards process. He gladly and efficiently chaired one of our award subcommittees, work that he completed barely a month before his passing. We have lost a wonderful human being and a giant of African and humanistic studies. We will miss him.”