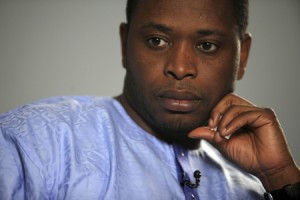 Nigerian television producer, writer of satirical novels, children's tales, and plays. In 1994 Saro-Wiwa was imprisoned by order of the dictator Sani Abacha. He had strongly defended the rights of the Ogoni people and criticized the government's oil policy with Royal Dutch/Shell. Despite wide international protests, Saro-Wiwa was hanged after a show trial with other eight Ogoni rights activists in Port Harcourt, on November 10, 1995.

He laughed gently and I relaxed
Happy to find
In spite of the gun.
He was still a man.
It lit the dark
that gentle laugh
In the pith of night...
But it was only the low laugh
Of one who was soon to die.
(from Songs in a Time of War, 1985)

Ken Saro-Wiwa was born Kenule Benson Tsaro-Wiwa in Bori, Rivers State, the son of Jim Beesom Wiwa, a businessman and community chief, and Widy, a farmer. "My father was seen as a child prodigy," the author's son later wrote of his father in In the Shadow of a Saint: A Son's Journey to Understand His Father's Legacy (2001), "he walked at seven months, and his parents doted on him because he was, for the first seven years of his life, their only child." At the age of thirteen, Saro-Wiwa won a scholarship to Government College in Umuahia, where also Chinua Achebe and Elechi Amadi studied. He was a model pupil and adored the English way of life.

After graduating from the University of Ibadan, Saro-Wiwa taught at the government college in Umuahia, and at Stella Maris Colege in Port Harcourt. He worked also as a teacher at the University of Lagos. Some of Saro-Wiwa's earlier writings appeared in the student magazine The Horizon, which he edited. During the Biafran civil war he chose the Nigerian side and was the administrator for the oil depot at Bonny Island. He then served in the Rivers State Cabinet as a regional commissioner for education. In 1973 he was dismissed due his opinions on autonomy for the Ogoni people. Oil had been found in the region in the late 1950s, but economic growth and big business also created around it an entangled web of political intrigues, environmental problems and corruption. Through his writings Saro-Wiwa became increasingly involved in activities, which brought national and international attention to the campaign of the Ogoni people. However, he did not imagine that he would become a full-time writer. He once said that "the writer cannot be a mere storyteller; he cannot be a mere teacher; he cannot merely X-ray society's weaknesses, its ills, its perils. He or she must be actively involved shaping its present and its future."

In the 1970s Saro-Wiwa established several retail and real estate ventures. Most of his books were published by his Saros publishing company. As a writer he first achieved fame with the awarded radio play 'The Transistor Radio' in 1972. Several of his short stories and journalistic works he wrote for Sam Amuka-Pemu's newspapers and magazines. In Vanguard he published political columns and from 1989 he wrote the "Similla" column for a local Sunday newspaper. Amuka-Pemu was killed in 1977 after founding The Punch magazine. In 1991 Saro-Wiwa dedicated his collection of essays, Nigeria, The Brink of Disaster, to him.

Saro-Wiwa's first novel, Sozaboy: A Novel in Rotten English, was published in 1985. The antiwar work was written in 'pidgin' English ("rotten English") - an English-based dialect spoken by many Nigerians. Its title means "soldier boy". Influenced by James Joyce, Saro-Wiwa had already experimented with the vernacular style while still an undergraduate student. The story was partly based on Saro-Wiwa's own experiences and was about a young man who serves as a soldier during the Biafran War. Saro-Wiwa dedicated Adaku and Other Stories (1989) to his sisters and depicted in its stories "the condition of women". Lemona's Tale (1996), published posthumously, also examined the role of women in changing society.

For young people Saro-Wiwa wrote an extremely popular series created around a character called Basi. For the humorous television series Basi & Company, set in Lagos, he wrote and produced more than 150 episodes. The series was cancelled by the military dictatorship in 1992. Several of its scripts were adapted into children's books. At the height of his career, he wrote and published seven books in one year. Saro-Wiwa's success as a writer was shadowed by a family tragedy. His son, who was an Eton student, died during a rugby game. The death was a deep blow to the author. He had sent five of his children to private schools in England, hoping that they would all return to Nigeria and contribute to the development of the country.

In 1990 Saro-Wiwa founded the Movement for the Survival of the Ogoni People (MOSOP). A more radical youth movement, also founded by Saro-Wiwa, was reputedly engaged in sabotage against Shell. The company decided to cease operations in Ogoniland in 1993. In Nigeria, The Brink of Disaster and Genocide in Nigeria (1992), Saro-Wiwa criticized corruption and condemned Shell and British Petroleum. The Nigerian government decided to break MOSOP and Saro-Wiwa was arrested and a number of his supporters and relatives were slain at Giokoo. In his letter, which was written in prison and published in May 1955 in the Mail and the Guardian, Saro-Wiwa stated: "Ultimately the fault lies at the door of the British government. It is the British government which supplies arms and credit to the military dictators of Nigeria, knowing full well that all such arms will only be used against innocent, unarmed citizens." In another letter he summarized: "The most important thing for me is that I've used my talents as a writer to enable the Ogoni people to confront their tormentors. I was not able to do it as a politician or a businessman. My writing did it. And it sure makes me feel good! I'm mentally prepared for the worst, but hopeful for the best. I think I have the moral victory."

Following a show trial, the junta executed Saro-Wiwa along with eight other Ogoni leaders. The official Shell response to the execution was silence. Saro-Wiwa's body was buried in an unmarked, common grave in the eastern city of Port Harcourt. His father, Chief Jim Beesom Wiwa, said in an interview in 2001 that according to Ogoni tradition, he should now be being looked after by his son - he was 96. "No-one is feeding me. I leave the whole thing in the hands of God, but how can I be happy?"

The author's son, Ken Wiwa, has confessed that it was never natural for him to continue in his father's footsteps. "He usually opened the proceeding, droning on about his politics, trying to drill his values into me, sprinkling the lecture with his favorite phrases: 'Hard work doesn't kill'; 'To whom much is given, much is expected'; 'In Nigeria, the only wrongdoers are those who do no wrong'; 'To live a day in Nigeria is to die many times.' He usually ended with the clincher that the ball was in my court, or with the reminder that he had given me the best opportunities in life." Eventually Ken Wiwa became a journalist, who determined to keep his father's memory alive, and started to work toward the establishment of the Ken Saro-Wiwa Foundation.