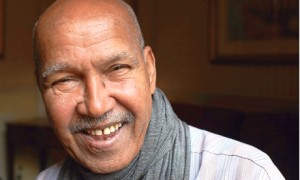 Somali novelist, writing in English and Somali. Farah has ofted dealt the history of his country throught the fates of his characters. The central theme in his work is the women's liberation in postcolonial Somaliland, which he sees as a precondition for political and individual freedom. The majority of his essays, novels, short stories, plays, and film scripts are written in English, but he has also translated children's stories from Arabic, Italian, French, and English into Somali. Farah received in 1998 the Neustadt Award.

...Nasser believed she could remove her props of age and mask of beauty whenever she wanted; it was as easy for her as undressing before a near-stranger had been, a near-stranger whom she imagined would make carry the seed which would multiply in her womb and flourish the actress's splendour. She said, her voice calm as her delivery had been rehearsed:

Some of us have been catapulted into the centre-stage of a century we actually don't belong in and have nothing in common with. Some of us have been forced by circumstance to accept conditions and the dictates of the century's needs. It's like living all your life natural darkness or in an area bathed in moonlight. Then suddenly powerful electric bulbs are switched on and you become the spot on which the light falls, upon whom all the world's eyes meet. (from Sardines, 1981)

Nuruddin Farah was born in Baidoa, a city in Italian Somaliland, which was at the time under British control. His father worked as a translator for the British. Soon after Nuruddin's birth he was transferred to work for the governor in the Ogaden (the Ethiopian West). In 1948 the British restored the Ogaden to Ethiopian rule, and a year later the recently formed United Nations returned the south to Italy. Farah received his primary education at schools in Kallafo, Ogden. He spoke English, Arabic, and Amharic, the official Ethiopian language.

Somalia was granted independence by the British and Italians in 1960. Three years later Farah moved to the southern region to flee from border conflicts in the Ogaden. After studying literature and philosophy in India at the University of Chandigarh, he returned to Somalia and taught in Mogadisho. He lived then in England for a time. In 1974 Farah escaped from Somalia after authorities had condemned his second novel, A NAKED NEEDLE. Siyad Barre's regime banned all of his works in Somalia and ordered that the author be killed. Farah has held teaching positions at universities in the United States, Germany, Italy, Nigeria, Sudan, Gambia, and India and has visited the former Soviet Union. He has lived years also in Rome. When Farah met his sister and father in Mombasa's Utange refugee camp he asked himself in YESTERDAY, TOMORROW: VOICES FROM THE SOMALI DIASPORA (2000): "what would become of us without mitigation, the kindly interventions of our women?" Farah saw again his home country in 1996, first time after 22 years in exile. In 1998 Farah moved to Capetown, South Africa.

Farah made his debut as a novelist with FROM A CROOKED RIB (1970), which appeared in the Heinemann African Writers' Series. It told a story about a nomad girl, Ebla, who flees her family's camp because she has been promised in marriage to an old man, 40 years her senior. The novel reveals the authoritarian role of the patriarchal clan system, in which women are exploited and denied individual rights. Ebla's quest takes her first to a small town, and eventually she arrives in Mogadiscio. Farah's Somali novel was serialized in the local papers in 1973, but was discontinued when the government found his work politically objectionable.

A Naked Needle (1976) explores the relationships of Somali men and women with Westerners. The protagonist, Koschin, is a Mogadisho teacher, whose favorite novel is Wole Soyinka's The Interpreters. He has promised to marry an English girl while studying overseas. The girl arrives in Somalia and expects Koschin to keep his promise. Farah studies the crisis of Somali identity allegorically, and suggests that women's lives are even more dominated by male authority since the achievement of political independence.

Farah's trilogy, VARIATIONS ON THE THEME OF AN AFRICAN DICTATORSHIP (1980-1983) draws parallels between the colonial practices and authoritarian regimes in postcolonial Somalia. The first part, SWEET AND SOUR MILK (1979), is a novel about political terror and two twins, Loyaan, a dentist, and Soyaan, a journalist, who dies mysteriously. In his inquiry about his brother's death Loyaan finds out the Soyaan was a member of an organization that aimed at overthrowing the regime. At the end Loyaan is appointed ambassador of Yugoslavia, like his brother, and his fate is left open. The book received the English-Speaking Union Literary Award. SARDINES (1981) was praised for its consciousness of style. In the story an editor of a national newspaper is sacked. Her husband is lured to become a minister by false promises. He rules his house with the iron hand of traditional Islam and she fears that her daughter will be forced to submit to the horrors of female circumcision.

MAPS (1986) is the first novel of a second trilogy, BLOOD IN THE SUN, that studies the pain of cultural uncertainty in postcolonial reality. GIFTS (1999) dealt with foreign aid. Duniya, a nurse at a maternity hospital, is once widowed and once divorced. She has no intentions getting entangled again - until she meets an American-educated economist Bosaano, driving his cousin's taxi. "Suddenly the two of them were exaggeratedly conscious of each other's presence, aware of their physical proximity for the first time. Disregarding a small crowd that out of curiosity had gathered around the car, Duniya and Bosaaso touched, marvelling at having shared a life-and-death experience, at having stopped in good time before crossing a threshold." The novel offers the reader more optimistic view of the war-torn land than Maps, which focuses on the Ogaden war of 1977, and SECRETS (1998), which mirrors Somalia's violent recent history and long-simmering tribal hatreds. In the story young successful businessman Kalaman learns the truth about himself and his family - he is the result of a gang rape committed by members of a rival clan. Kalaman lives in Mogadisho and one day his chidhood sweetheart, Sholoongo, visits him and tells that she wants to procreate a child with him. Sholoongo has strange powers, she stays at his apartment, and Kalaman suspects that she had an affair with his father. Farah's tells the story from different viewpoints within the family - they all have their own secrets and special relationship to Sholoongo and to forces she represents. "We say, in Somali, that you don't ask someone whom you know to tell you about themselves." Kalamen rejects her but she sleeps with his grandfather Nonno, who dies. "One body. Three secrets," ends Farah the story.