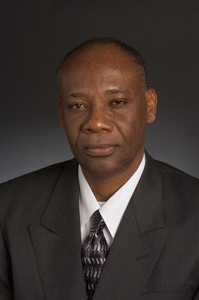 Born in 1946 in Mbujimayi, Democratic Republic of Congo, and author of over a dozen novels in French plus three in Cilubà, poetry, several plays and a large number of scholarly works on African literature, Pius Ngandu began his literary and academic career in 1971when he was hired at the University Lovanium of Kinshasa.His novel first novel La mort faite homme (Death Made into Man) dealt with the assassinations in 1969 at Lovanium, and when it was submitted he was promptly jailed. This was the beginning of long record of conflict with the authorities and a distinguished career as an innovative, radical writer. From the beginning Ngandu brought children and youth into his stories, and so can be considered a precursor of much contemporary writing about children at war.

Like many African writers, Ngandu Nkashama lives in exile, his academic career having taken him from the Université de Paris III - Sorbonne Nouvelle, to Louisiana State University in Baton Rouge.

He has had this to say about his circumstances: "It is ever more clear that many African countries have deliberately chosen to send the more turbulent and revolutionary citizens into exile, leaving them no hope of return. This of course allows the wealthy and the oppressors to prolong their monopoly of horror indefinitely" (Mots pluriels).