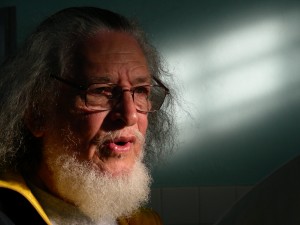 Known as the "singing voice of the South African Liberation Movement", Dennis Brutus, more than any other single person, was responsible for South Africa’s and Rhodesia’s exclusion from the Olympic Games. In the 1960s and early 1970s Dennis Brutus was a hated figure for those defending sports apartheid. Knowing that if white South Africa was deprived of its fanatical sports devotion it would be forced to change, he helped secure suspension from the Olympics in 1964 and expulsion in 1970.Political campaigns led to his being banned from all political and social activity. Trying to escape his ban to attend an Olympic meeting in Europe in 1963, he was arrested and subsequently sentenced to eighteen months of hard labor. He was held captive on Robben Island off Capetown, South Africa, where he spent time breaking stones with Nelson Mandela.

Dennis Brutus was born in 1924 in Zimbabwe of South African parents. He attended Fort Hare and the University of Witwaterstand and taught for fourteen years in South African high schools.After leaving South Africa in 1966 with a Rhodesian passport, Brutus made his home in England. In 1983, after engaging in a protracted legal struggle and appearing on ABC’s Nightline with Ted Koppel, he won the right to stay in the United States as a political refugee. Currently living in the United States, he is now a professor of African Studies and African Literature, and is Chair of the Department of Black Community Education Research and Development at the University of Pittsburgh. He formerly was a tenured professor at Northwestern University, a visiting professor at Swarthmore College, the University of Denver, and the University of Texas at Austin, and was the Distinguished Visiting Humanist at the University of Colorado, Boulder. He was the recipient of the Langston Hughes Award in 1987 (the first non-African American to receive that award) and was honored with the first Paul Robeson Award in 1989, for "artistic excellence, political consciousness and integrity."

Brutus' first collection of poetry, Sirens, Knuckles and Boots (1962), was published in Nigeria while he was in prison. Although Brutus' work is protest poetry, there is a maturity and restraint in his poems that prevent them from ever becoming self-pitying: ". . . all our land is scarred with terror / rendered unlovely and unlovable; / sundered are we and all our passionate surrender / but somehow tenderness survives" (from "Somehow We Survive"). Even in Letters to Martha and Other Poems from a South African Prison (1969), which records his experiences of misery and loneliness as a political prisoner, Brutus exhibits a restrained artistic control and combines tenderness with anger. His later works include A Simple Lust (1973), China Poems (1975), Stubborn Hope (1978), Salutes and Censures (1984), Airs and Tributes (1989), and Still the Sirens (1993).

Dennis Brutus is in high demand as a charismatic speaker world-wide and has recently been focusing on the injustices of the IMF and World Bank policies in Third World countries, including the impact on the environment. His activism is highly respected and inspirational to international audiences.